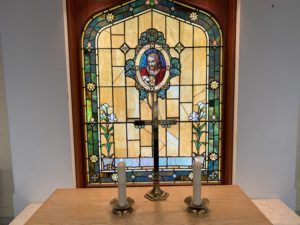 The restoration of this historic window is a tribute to a pioneer Japanese pastor who struggled to bring Christianity to the San Gabriel Valley. The Rev. Jutaro Yukoi was an ordained Baptist minister who arrived in EI Monte in 1930. He went to Seattle first to marry Minnie Sage; a Caucasian missionary, as interracial marriages were banned in California.

The couple faced racial discrimination and had difficulty in fmding housing. They finally found a duplex in the city of El Monte and began a preschool to teach the children about the Christian faith. I am one of the first nursery school students.

With limited funds, Rev. Yokoi purchased a bus so he could gather the children and started a Sunday School on Sunday afternoon at the Methodist Church. His ministry began during the depression years and the Japanese farmers were reluctant to send their children to Sunday School. Christianity was not familiar to them and many farmers were not willing to have Rev. Yokoi pick up their children who were their main source of labor on the farms.

Rev. Yokoi needed a larger home for the Sunday School students so his wife purchased a house suitable for Sunday School and Church. There was strong protest from the neighbors. The Alien Land Law in California prevented Rev. Yokoi from purchasing the property.

For four years he served as a Baptist pastor, but in 1934 he was asked to resign by the Baptists because they did not recognize his marriage. Fortunately the Methodist recognized him as a pastor and he continued in his plan to serve God and others.

Rev. Yokoi was truly dedicated in helping the youth He sponsored a Boy Scout Troop, formed a MYF group and provided transportation to the meetings and conferences. He also started a softball team so that the youths could participate in the local Church league.

Rev. Yokoi served not only as a pastor but as a “social worker” assisting the Japanese families. He visited the farms and listened to their problems. If an interpreter was needed, he would translate letters, school notices, etc. He referred families with medical problems to see the doctor or dentists and often accompanied them, and provided the needed transportation. His visits were not always welcome by the busy farmers. He was never too busy to help people in need.

At the end of World War II, he returned to EI Monte to help the returning residents from the Internment Camps. The church served as a hostel as there was a housing shortage. Church and Sunday School continued with new residents in the San Gabriel Valley. With the lifting of the Naturalization ban, Rev. Yokoi became a United States citizen and began teaching others to obtain their citizenship.

Following his retirement he continued to hold Japanese language services. His monthly visits to a church in Mesa, Arizona was very much appreciated by the Okuda Memorial Methodist Church. In gratitude, the Church members purchased a crypt for Rev. Yokoi at his passing and his final resting place is in Phoenix, Arizona.

Rev. Yokoi was truly a dedicated pastor. The stained glass window is the only tangible fixture that remains from the old church. It is an important part of Sage’s history and serves as a memorial and tribute to a pastor who never gave up. His faith and trust in God touched many lives.

Sage Church has moved three times from EI Monte. In 1995 the Granada Park United Methodist Church invited and welcomed Sage Church to share their facilities and in 1998 the two churches merged to become the Sage Granada Park Untied Methodist Church. We are a unified, inclusive, multicultural church reflecting the rich heritage we represent united in Christ, with a commitment to God’s love through Jesus Christ. Our church is proud and happy that this historic Stained Glass Window will have a permanent home to be shared with four congregations. 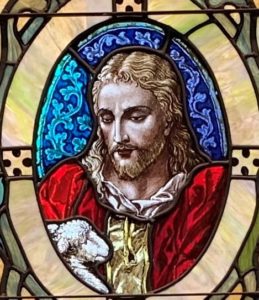 The Stained Glass Window of Jesus holding a lamb was a precious gift to our church on Meeker Ave. in E1 Monte, California from the First UMC of El Monte. Tomi Nagai of El Monte received this stained glass window for our church when our chapel ,vas added and dedicated on April 6, 1957. Our church was then named San Gabriel Valley Japanese Methodist Church. In 1961 it was renamed Sage Memorial Methodist Church in honor of Rev. Jutaro Yokoi’s first wife, Sophia Minnie Sage Yokoi.

I want to see this stained glass window restored & placed at Sage Granada Park UMC as it came to us with a lot of history from First UMC of El Monte. In 1931, Rev. Jutaro & Minnie Sage Yokoi began a Sunday School for the children of the Japanese community. The First UMC Church of El Monte offered their church facilities & Caucasian Sunday School teachers for our Sunday School. At one Easter Service 90 Japanese American children attended with Rev. Yokoi’s leadership. Rev. Yokoi chose the city of El Monte to begin his ministry as it was the hub of the Japanese community at that time.

It was a ministry on wheels as Rev. Yokoi drove a bus, station wagon, or his sedan to pick up the children for Sunday School from the eastside & westside of the San Gabriel Valley. His ministry spanned 40 years in this area. Many of us are Christians today because of his ministry.

In May of 1998, we became a multicultural church known as Sage Granada Park UMC in Alhambra, California. We look forward to having this memorable gift of Jesus and the lamb stained glass window restored and placed in the Wittrig Room at Sage Granada Park UMC so we can all see it shining again ! 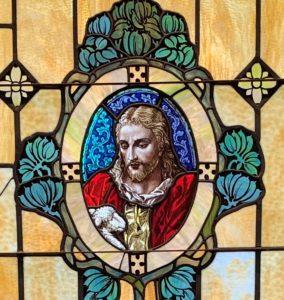 Rev. Jutaro Yokoi founded the Sage Methodist Church in the 1930’s. During those depression years, he arrived in EI Monte, California with his wife Sophia Minnie Sage, a Caucasian missionary from San Diego. Because California law did not allow inter-racial marriages, they had to be married in Seattle, Washington.

The Yokoi’s had a difficulty finding a home due to housing and racial discrimination. But after much strife, they found a home in EI Monte and as a Baptist minister, Rev. Yokoi began to visit Japanese families in the San Gabriel Valley. In 1934, the Baptist Church asked for Rev. Yokoi’s resignation, as they did not recognize his marriage. Fortunately, the recently formed Japanese Methodist Conference welcomed and accepted Rev. Yokoi.

In 1935, Mrs. Yokoi received an inheritance from the sale of her parents’ property in Illinois and purchased the Meeker Avenue property in El Monte. Despite protests by the neighbors, the church was built and dedicated in 1937 with the installed stained glass i, window donated by the E1 Monte Methodist Church.

After the passing of Mrs. Yokoi in January 1941 and the ensuing events of World War II, Rev. Yokoi was incarcerated at the Heart Mountain Relocation Camp in Wyoming but continued his ministry. After the war, and his return to EI Monte, the Sunday school grew, membership increased and a new chapel was added to the original building. In 1961, the church was renamed Sage Memorial Methodist Church in honor and memory of Sophia Minnie Sage Yokoi.

With changing property usage, the Meeker A venue church was sold and Sage began its travels throughout the San Gabriel Valley to find a new home. From EI Monte First UMC, Sage moved to Monterey Park UMC and then in 1995 found a permanent home at the Granada Park UMC in Alhambra and by May 1998 the two congregations merged to become Sage Granada Park UMC.

On January 17,2002, Susan Wallis of the Wallis Stained Glass Restoration Company, who have operated in the San Gabriel Valley since 1930, and who installed the stained glass windows presently in the church, inspected the window for restoration.

The History and Archive Team, headed by Sada Mayeda met with Ms. Wallis and agreed that it could be fully restored, which requires complete disassembly and reassembly, and placed in a shadow box in the Wittrig Room.

As a goal, restoration by the first week in May 2002 would allow its consecration during United Methodist Week. The cost or restoration is $ 4,180.00

* Above information is provided by a few of our church members